I’m not usually one to make black and white statements. I believe in unlimited shades of gray, multiple facets, and the many different perspectives there are to view things. I have found though that there are a few things that are simply as they are—absolutes, if you will.

I have found no exceptions to this. For example:

Sometimes an ending feels like a dead end, a brick wall, or a finale.  Sometimes it feels that there will be nothing else to take its place, and we often don’t want anything in its place. Sometimes it really does feel final.

And then, there are times that the beginning, the new thing, is a really welcome distraction from what has ended. Sometimes we don’t even know how we lived without this new thing for so long, and we sometimes forget the thing that ended or we simply don’t miss it very much. More often than not though, there’s a mix of both – a sense of loss and a sense of what’s new or next.

The New Year is upon us…

We have the perfect opening to review what has happened and what we’ve created in the past 365 days. We also have the opportunity to release or end those things that are no longer working for us.

As you look around you’ll see people who are happily purging, trashing, and letting go—lightening their loads. They look happy, peaceful, and unburdened.

You’ll also see people planning, preparing, and already geared up for the year ahead. Their excitement is contagious and their enthusiasm and drive light the way for not only them but also for others in their midst.

Are you ready for the ending and the beginning that December 31st at midnight holds?

There’s no right or wrong way to approach it – releasing or preparing provide the same opening for you. Ending something or starting something… it’s all about movement, momentum, and living. It’s all about you, baby! Always has been, always will be.

No matter what you choose, what you do, or where this year takes you, I wish you an awesome and fulfilling 2016! 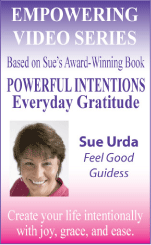